Ladies and Gentleman:
The Daily Mail has used a Freedom of Information request to obtain the security details pertaining to the Duchess of Sussex private trip to New York City in February 2019 to attend a baby shower hosted in her honor. The report shows specific information concerning the security arrangements for this event. Some details outlined in this report were intentionally omitted from the tabloid reports. Therefore, please lend me your ear as I attempt to summarize the details that were clearly stated in the report, including those details the tabloid reporters intentionally omitted. 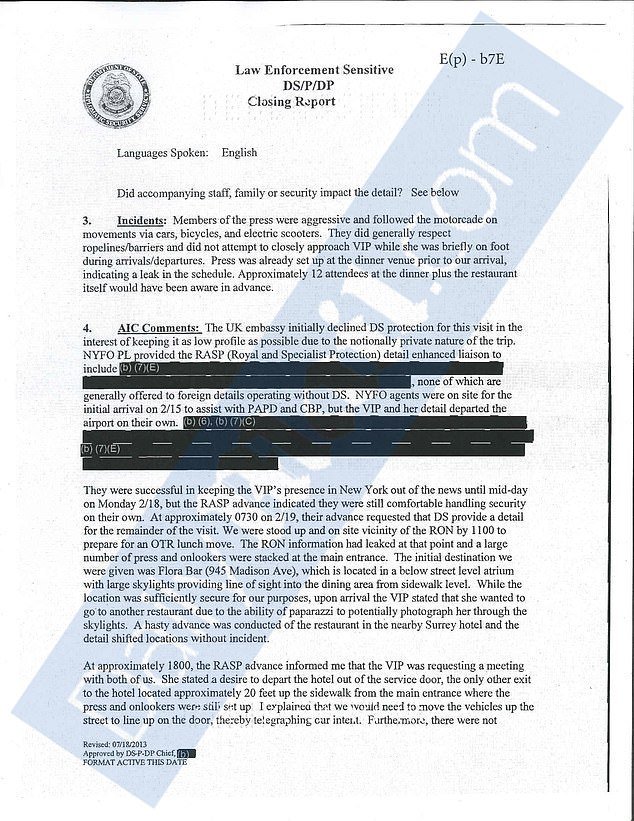 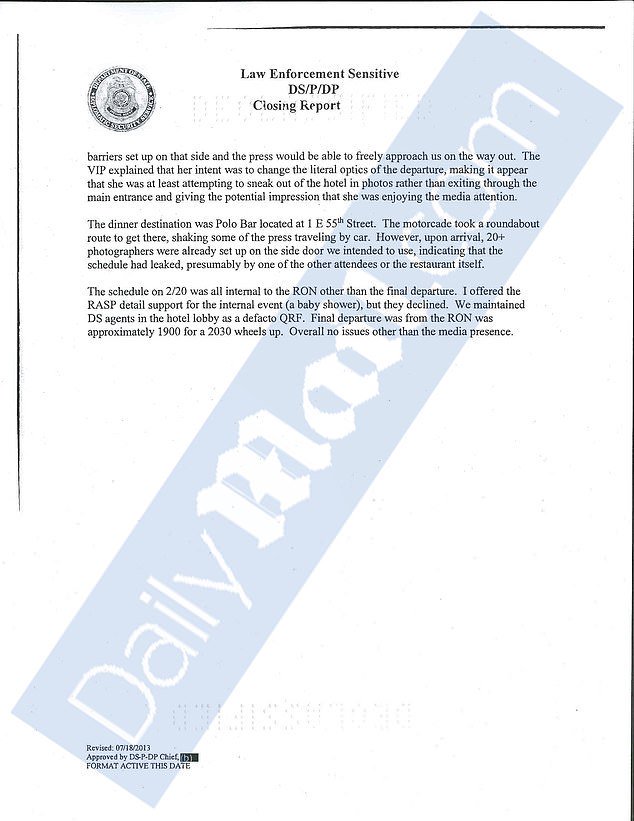 The UK Embassy initially declined DS security to provide protection for the Duchess of Sussex for this visit in the interest of keeping it as low profile as possible due to the notionally private nature of the trip. The visit remained a secret and was not reported through news outlets until Monday, February 18, 2019; three days after the Duchess’ arrival. The Royal and Special Protection (RASP) detail were confident they could handle the situation. At approximately 7:30 a.m. on February 19th, (Diplomatic Service (DS) was assigned and requested the Duchess’ itinerary for the remainder of her visit. The protection detail arrived at 11 a.m., by then the hotel information had leaked and a large number of press and onlookers were stacked at the main entrance. 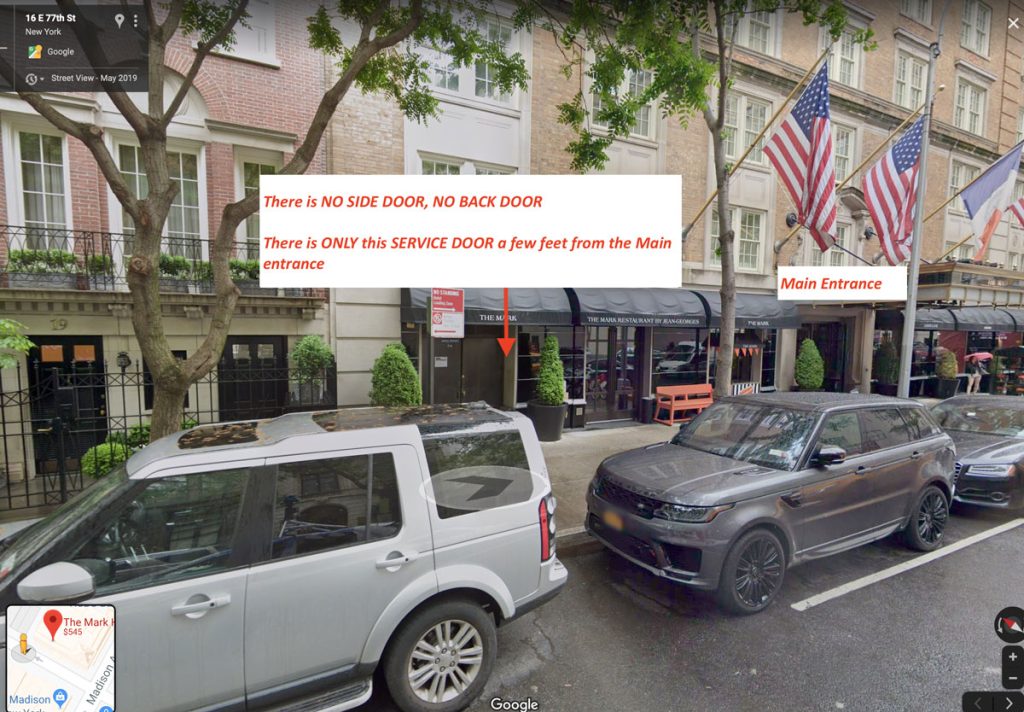 Fact: The hotel selected is attached to other buildings on a busy Manhattan street. There is no side door. There is no back door. The only other entrance is the service entrance which is approximately 20 feet away from the main entrance.

The midday dining destination was a restaurant located in a below street level atrium with large skylights providing a line of sight into the dining area from the sidewalk. However, after the leak, a request to move to another restaurant was submitted due to the ability of the paparazzi to potentially photograph the Duchess through the skylights. The protection detail arranged to shift location without incident.

At 6 p.m. the Duchess requested a meeting and expressed a desire to depart the hotel from the service door. It was explained to the Duchess that in moving the vehicle up to the service door, it would “telegraph their intent” and the press would be able to freely approach. The Duchess understood and explained that the intent was to “change the literal optics of the departure, making it appear that she was at least attempting to sneak out of the hotel…rather than through the main entrance…rather than giving the potential impression that she was enjoying the media attention.”

The British media’s over-the-top coverage of the Duchess of Sussex’s Baby Shower intentionally omits information pertaining to this event to support their negative spin, not to mention that the cost of this event rises with each report. They purposely implied that the Duchess chose to leave through the main entrance to court press attention when it’s clearly stated in the Security Report that she asked to leave from the service entrance.

Let us not lose sight of the fact that the Baby Shower was held in the United States of America. A Baby Shower is an American tradition, a celebration for the expectant mother and is usually hosted by close friends and family members. The Duchess of Sussex baby shower was arranged by, hosted by, and paid for by her friends. The Duchess came to New York City on a private visit. She was entitled to the service of protection officers. Had she remained in the UK and decided to go out and about, would she not also be entitled to protection officers? Don’t be misled by the obfuscation and lies.

They freely quote the cost of the most expensive suite in the hotel but offered no proof that the Duchess stayed in the $75,000 night five-bedroom suite, what we do know is that wherever she stayed it was paid for privately. And, why is it so egregious that the Duchess flew back to the UK as a passenger on her friend’s private jet? Yet, on a private trip funded by her friends at NO COST to UK taxpayers, the UK tabloids managed to write dozens of articles, appear on countless talks shows to vilify the Duchess for daring to take part in her friends’ decision to celebrate a momentous occurrence in her life. What a shame!

When the followers of the Duchess of Sussex cry foul and accuse the UK tabloids of biased reporting, there is always a pushback and denial. But, recently the Duke and Duchess of Cambridge, their three children, and the in-laws, Carole and Michael Middleton, spent nearly two weeks at villa on the private island of Mustique in the Caribbean. Mustique, known regularly makes the top ten list as a favorite destination of celebrities and the super-rich. It is known for its beautiful beaches, exclusive, luxury accommodations, top-notched security and privacy. Accommodations alone would run into the tens of thousands per week; cost of Royal protection officers not included. You can only access Mustique from the island of St. Vincent or Barbados via a private charter.

The trip is noteworthy for the absence of daily negative headlines, talk show conversations about the damage to the environment and a tally of every pound spent. No outrage, no complaints of taxpayers’ dollars being used to finance an expensive vacation, which also included the celebration of Prince George’s 6th birthday and the in-laws. Instead we are treated to the UK tabloids flowery language in their description of children’s bedrooms and the gorgeous views, but no reminder that the in-laws were included.

We will not soon forget the outrage expressed and concern for taxpayers when the Duchess of Sussex’s mother, Ms. Doria Ragland, rode a few hundred feet in the same vehicle with the Sussexes, on the day of the rollout of the Together Cookbook project.

So to the UK tabloid reporters and you know who you are, we see what you’re doing. It’s duplicitous and unprofessional. Why is it so difficult for you to engage in fair and accurate reporting? Once again, we call on you to cease and desist with the unethical reporting for what seems to be the sole intent to unfairly malign the character and integrity of a hardworking young woman – Her Royal Highness, The Duchess of Sussex.

A new Household for The Duke and Duchess of Sussex

SMOKE AND MIRRORS 3: Royalists, the royals they support and the people who cover them