The dust has settled a bit, and perhaps it’s because some “Royal Reporters,” “Royal Correspondents,” “Body Language Experts,” and “Handwriting Experts” for the Duchess of Sussex” have exhausted their bank of criticisms, so they await their next move. When that happens, their wicked poisoned pens can once again start scribbling the standard lies and negative stories about what she has done, what she should not have done, and what she should have done. In the meantime, to fill up spaces in their empty columns, old stories are being rehashed.

We will not fret. If these reporters, correspondents, and experts are not tired of printing their usual tripe, then neither shall we be tired of setting the record straight.

Let us begin with the Duchess of Sussex as guest editor of the September issue of British Vogue. First and foremost it should be noted that the most important edition of the year for this magazine is the fall fashion issue. When the news broke that the Duchess would be the guest editor, excitement was overwhelming. Those who are familiar with her work ethic were confident the finished product would not be a disappointment.

And then it happened: Forces for Change – 15 women of varying ages, ethnicities and accomplishments embrace the cover. Copies flew off the shelves and in a very short period of time, outlets were reporting no inventory, high back order numbers and some could no longer take backorders. The Duchess of Sussex did not disappoint, she did an excellent job.

Enter stage left, the poison pen writers. To deter people from buying the magazine, there were reports of an inflated price. Another tactic used to deter people from purchasing was to complain that the magazine was filled with pages of advertisements for items beyond the spending power of most people, so what does a member of the Royal family have to do with Guest Editing such a magazine.

The British media’s fake outrage, the Palace and the organized smear campaign

Imagine what they would have said if the Duchess of Sussex was featured on the front cover? Other Royal family members have appeared on the cover and featured in an article and even guest edited such glossy magazines. To name a few:

I do not recall reading negative reports about any of the above royal family members associating with a magazine.

One Royal Reporter stated she couldn’t understand why there weren’t a lot of White women featured on the cover. On the media outlet Twitter account she asks,

“ I wonder whether Meghan (they hate to refer to her as Duchess) was conscious of the bias she showed in choosing 15 ‘forces for change’ for the Vogue cover, all of whom were women of which only five were white?”.

Considering this is a global issue, I would think 5 of 15 is a fair number. However, I challenge the Royal Reporter to count and report the number of non-white women who have graced the cover of Vogue since its initial publication in 1892. 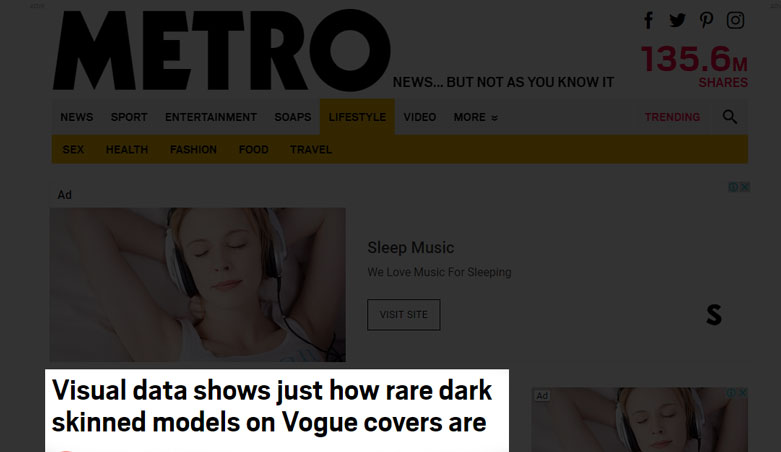 I assume the reporter was surprised that the Duchess dared to feature such a diverse group of women on the cover of a magazine known to feature white women.

When the issue was released, Morning TV in the United Kingdom was on fire. “Experts” were slamming the Duchess’s editorship, accusing her of doing the same thing for which other Royals have been praised. The following are excerpts from articles written by reports (available online for you to examine). Their comments clearly complimenting the other royal family members while their reports always presenting the Duchess in a negative light. Their objective is to break her spirit. They cannot comprehend how this American woman, an actress of mixed race heritage, can so outshine some members of the Royal Family and exposing those who are not using their privileged platform to enhance the patronages bestowed on them.
The reporters and commentators prefer to break her down with untruths and racist remarks. They deny their remarks are racists. You read the excerpts and decide.

According to news.com.au, when Prince William featured on the cover of GQ, here are some of the quotes from their publication

Irish designer Paul Costelloe has said that he was less than impressed with Kate Middleton’s Vogue cover.

The Duchess of Cambridge appeared on the June cover of the fashion bible in casual, country-style attire that had mixed reactions around the world, with some saying it was underwhelming.

Costelloe (71) believes that Kate’s mother, Carole Middleton, is a huge influence in her daughter’s life.
“She’s her mother’s daughter, and it’s clear her mother plays a very important role in her life, which is good.”

“Kate has a very different background to Princess Diana. Diana’s mother was an aristocrat while Kate’s was an air hostess.”

Why does The British media and correspondents continually find fault with EVERYTHING the Duchess of Sussex does?
I believe it’s because they are intimidated by a smart, beautiful, articulate, well-educated, independent woman who knows her mind and is not afraid to use her platform to enhance the lives of others who are less fortunate, which is what she did prior to becoming a member of the Royal family.

To the old and out-of-date courtiers, who try desperately to “preserve” the old way of doing things; it is now time to move into the 21st century. If you truly want to save your Monarchy, I suggest you work with The Duchess of Sussex. She was a humanitarian before she married into “The Firm.”

She was already carrying out “Royal Duties” before she said “I Will” to HRH Prince Harry. Thank God Prince Harry was smart enough not to let this woman get away and was prepared to marry the woman he loves regardless of the people’s opinion.

To the Royal Reporters, trolls, media correspondents and others, why can’t you see the impact of her work; the amazing things she does with her gifts and talents? The Monarchy has become relevant again, your economy has certainly experienced a boost, and many charities have acquired worldwide recognition.

Your tantrums and verbal abuse will not cause her to wane, she is too strong, she’s unbothered. I urge you to set aside the unwarranted hatred and join the Sussex Squad in assisting her to do her job as a Royal. The world is watching. Presently, you do not deserve her, only The Duke of Sussex and Archie Harrison Mountbatten Windsor are deserving of this amazing woman.

FLOWER: A Birthday Tribute to Meghan, Duchess of Sussex