While the word journalism has a positive connotation, conjuring images of objectivity and lack of bias, the type of journalism practiced by the British press in their royal reporting is the opposite. It is non-objective, extremely biased information that is used to manipulate or sway opinions, and sources are not always held accountable for veracity of the end product. From the beginning, their reporting of the Duchess of Sussex has had a negative bias, which is clearly obvious when contrasted with the positive bias shown to the other members of the royal family.

Objectivity may be non-existent, but hypocrisy seems to be the cornerstone of every word written or uttered. Today we turn our lens on Sarah Vine, columnist for the Daily Mail. She has positioned herself as the arbiter of propriety and all things royal and she finds The Duchess of Sussex wanting in all respect. She churns out writing that is fallacious, mean-spirited and self-congratulatory.

Let us look at the genesis of her latest criticism about the Duchess’s decision to fly alone to New York. It began with a tweet on September 4th responding to a remark made by Commons Speaker, John Bercow. 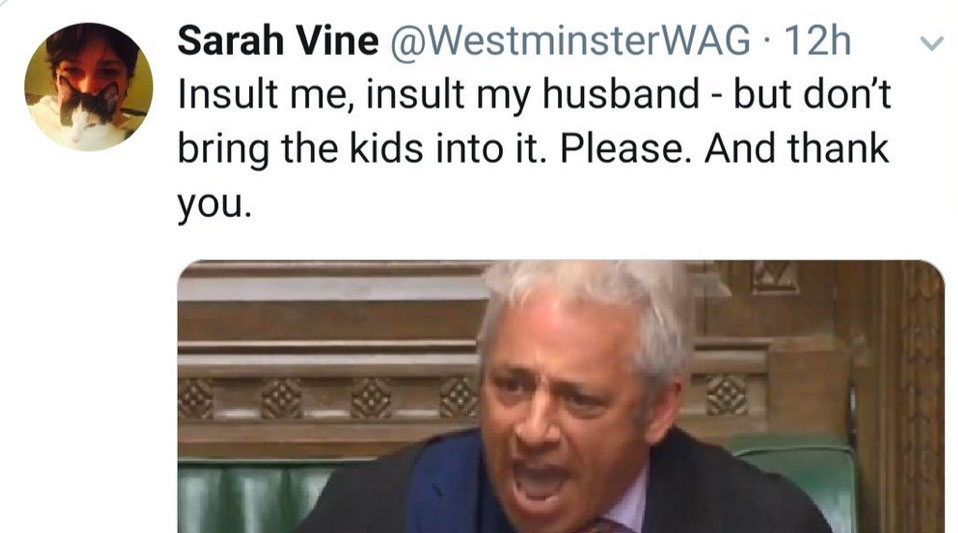 She was speaking of John Bercow’s remark, in the Commons, to her husband, Michael Gove, Minister for the Cabinet Office of the UK.

“… when he turns up at our children’s school as a parent
He’s a very well-behaved parent
He wouldn’t dare behave like that in front * and neither would I
don’t gesticulate don’t ran spare us the theatrics, behave yourself, be a good boy…”

*In the segments posted online the name of school was bleeped. The name of the school is a matter of public record, but because it is not germane to this story, we will not mention it.

The remark was not about the Gove’s children, it was about Mr. Gove’s behavior in a specific setting. The focus is on the action; mention of the children’s location merely used as an analogy.

Ironically, Ms. Vine’s tweet did what Mr. Bercow had not, it focused attention on the children; which one could cynically surmise had the intended response among certain constituents. It served as a distraction from the real issues concerning the United Kingdom and it gave Ms. Vine’s tabloid cohorts fodder for their next outrage and they took up the mantle and condemned Mr. Bercow.

We could also give Ms. Vine the benefit of the doubt, something sorely lacking in her columns about the Duchess of Sussex. We can assume she had a genuine concern for the protection of children and she called out Mr. Bercow’s remark, because it breeched her moral threshold. Before you praise her, take a look at another tweet. 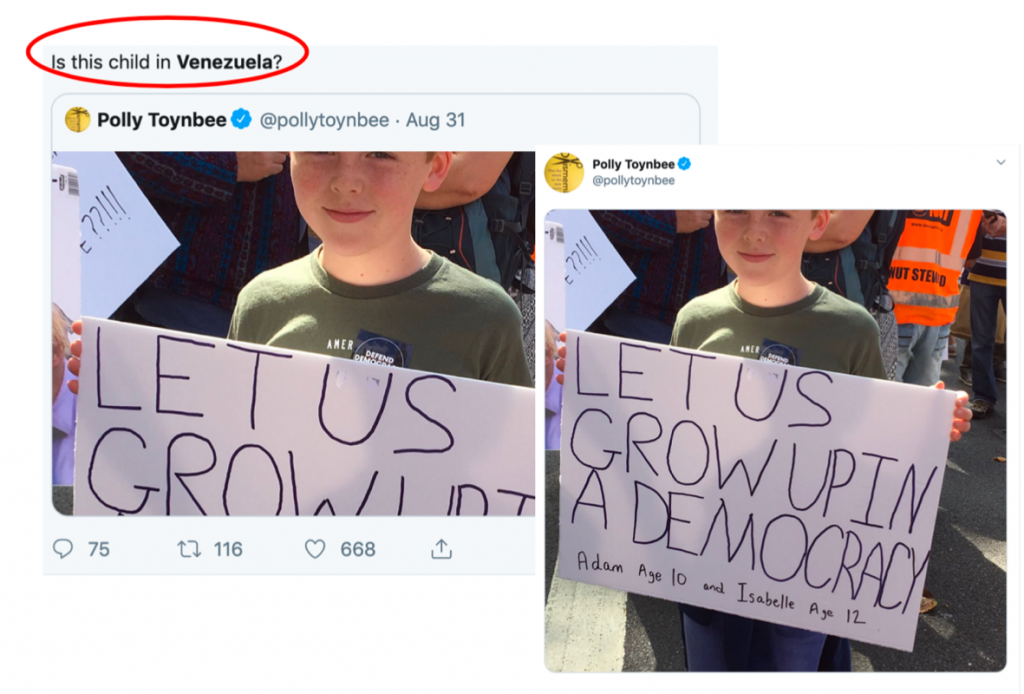 Here we have a quote tweet – a retweet with a comment, not about the event, not about an adult, but about a child. This too we are sure Ms. Vine would object to, after all children should be left out of differences between adults. Children are precious and must be protected at all cost and it is not for others to question the parents’ actions. So, who is the adult that retweeted a quote which included the picture of a child? Since you may be familiar with Sarah Vine’s hypocrisy, you know the answer to the question. 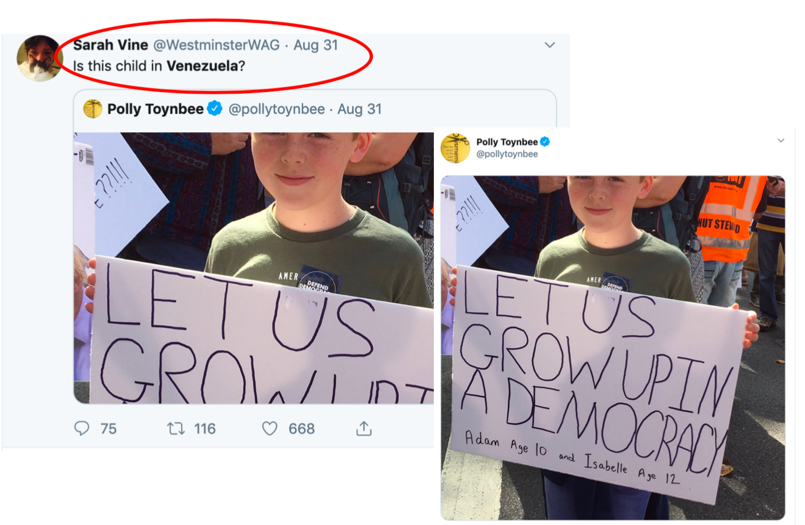 It seems not ALL children are off limits, because surely retweeting a picture of child when YOU declare children off limit is the height of hypocrisy. The argument could be made that the parents exposed the child to public comment by bringing him to the rally. If children should not be mentioned, shouldn’t this child be included? If the actions must be questioned then direct them to the parents.

Let us examine how Ms. Vine feels about the decisions parents make that others might question. According to an article which appeared in the IBT October 2016, Mr. Gove and Ms. Vine left their 11 year-old son alone at the Number 38 The Park in Cheltenham, an exclusive Bed & Breakfast, while they attended a party at another location. The couple told the hotel staff they would return at 9:30 pm and arranged for them to order a takeout meal for their son’s dinner. Later that evening, the porter found the child wandering the hallways looking for his parents. Concerned for the child’s safety, the porter called the parent’s phone, which was not answered. Ms. Vine and Mr. Gove returned to the B&B at 1:30 am. The couple declares their son is a mature adolescent and was in the company of the family dogs, so actually he was not alone. So, we see that Ms. Vine retains the right to decide how she should parent and doesn’t feel others should interfere, after all her “son had been perfectly safe.”

How does Ms. Vine feel about parents needing a break? Kate and Gerry McCann were on holiday in Portugal, when they left three-year-old Madeleine and her two-year-old twin siblings asleep while they dined in a restaurant 55 meters (180 ft.) away. The parents checked on the children throughout the evening, until 10:00pm when Mrs. McCann discovered Madeleine missing. Sara Vine later wrote about the disappearance, saying the three-year-old’s parents “Were only trying to do what countless loving but exhausted mothers and fathers of small children have done throughout the decades: have a well-earned break with their friends.”

Let us unpack Ms. Vine’s hypocrisy as it relates to the Duchess of Sussex’s trip to New York.

Children are off-limits. Strangers don’t get to decide how others parent. Countless loving but exhausted mothers and fathers should take a well-earned break with their friends, UNLESS, the parent is the Duchess of Sussex who flew to New York this weekend to watch her dear friend, tennis great, Serena Williams, compete in the US Opens Final. As far as we know this is the first time the Duchess has left her son overnight, since his birth. Fortunately, he was not left alone with a request for hotel staff to keep an eye on him. Master Archie Harrison Mountbatten-Windsor got exclusive time with his other parent, Prince Harry, in whose company we can be sure he was “perfectly safe”. It can be said Miss Vine did not directly speak of Master Archie and you are correct, but neither did Mr. Bercow. However, since a passing reference to Ms. Vine’s child is forbidden, should not the same courtesy be given to Master Archie Mountbatten-Windsor? 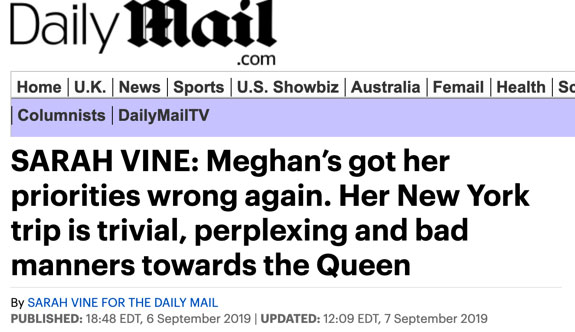 Ms. Vine took exception to the Duchess leaving her son, because mothers are not supposed to leave their “firstborn at the tender age of just four months”. Did we mention that Master Archie was with his other parent? Ms. Vine has no knowledge as to whether or not the Duchess is still breastfeeding. She has, however, decided the Duchess is not showing the appropriate level of obsession with HER son.

So strongly does she feel about this she deemed the trip “trivial, perplexing and bad manners to the Queen(?)” Ms. Vine feels she should be arbiter of what passes for an appropriate length of time “gazing in awe” at a newborn and the Duchess did not meet the threshold and she compounded the sin by “snubbing the Queen.” Please bear in mind that the tabloids have no information if or when the Sussexes will visit the Queen during her summer sojourn at Balmoral. With nothing but her misplaced, fake concern, Ms. Vine decided this was the weekend for a visit with grandmama; never mind that the tabloids have been declaring every weekend as “the weekend.”

Fortunately, for Duchess Meghan and Prince Harry, they are a couple, not a trouple, so Ms. Vine, despite her bloated sense of self-importance and hypocrisy, does not get a say in how the Sussexes raise their child. She does not get to declare her children off limit, but others are fair game and she doesn’t get to decide if and when the Duchess may leave her son. Give Ms. Vine the attention she deserves, NONE, and leave her to pontificate for her low information readers who think a tabloid hack writer validates their prejudices and justify their hatred of those they know are superior to them and to Ms. Vine in every way.