Following the straightforward statement, all media platforms in the UK and even the US started a very annoying narrative filled with double standards and the continued feeling of entitlement over Duchess Meghan and her son’s lives. Even crazier, there have been attempts to erase the importance of Queen Doria of California as part of Meghan’s life. I call her Queen because that is how I regard her and make no apologies whatsoever. This Insider.com article details the unfair treatment. 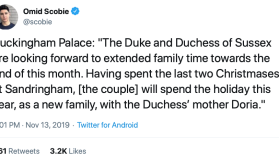 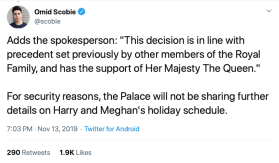 Prince Harry and then Meghan Markle began dating in 2016. She reportedly spent Christmas 2016 with her mother. They announced their engagement November 2017. In what was considered unprecedented, as his fiancé, Meghan spent the next celebration with the Royal Family at Sandringham. This gathering garnered an amateur photog a big payday as she captured the now infamous “Fab Four” pic. Fast forward to 2018, the couple spent their first Christmas after their wedding with the Royal Family. During that period, the rumor mill promulgated that Ms. Ragland was invited to the Royal festivities. This of course got the royal penny/pence pinchers’ trousers in a bunch; bringing on unnecessary hate toward Meghan and Ms. Ragland for no reason. Alas, pregnant Meghan took the customary walk to church chatting it up with her English Rose Sister-in-law Kate, which earned photogs and the media at large much money. Ms. Ragland remained wherever she was, minding her own Nubian business. The Year of Our Lord 2019 brought tremendous joy to the Sussexes with the birth of King Archie May 6, 2019. Meghan now has her “two best guys.” However Meghan took another year of dealing with the directed smear campaign against her which has led to law suits and an admission that it was indeed affecting her. After the Southern Africa tour, speculation was rife about a “6 week break,” prior to the release of the Buckingham Palace statement.

Immediately after the statement, there began a sinister and bigoted narrative that placed the importance of one human being Elizabeth Alexandra Mary Windsor and her wants and traditions over another Doria Loyce Ragland. Yes, Elizabeth is the Queen of England and Harry’s Grandmother but Ms. Ragland is equally as important, Meghan’s mother. Queen Doria has seemingly been the one steadfast family member Meghan has had her entire life! Moreover, the idea of rotating holidays with extended family is nothing ground breaking or earth shattering. Families do it all the time. The Cambridges did so with praise multiple times. There is however an obsessive need to police Meghan’s choices that has gone beyond the pale. Part of that anomaly includes people carelessly suggesting verbally or via keyboard that, Meghan needs to forgo Christmas with her mother because the Queen’s traditions are important and take precedence. The continued bigotry of it all is that, it is rumored that Palace courtiers informed the press that if Meghan was spending the holiday with her White (problematic) father, there would be no issue. 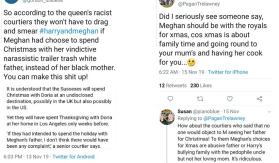 What I have read and heard over the last couple of weeks has been just pathetic! The British Press have now put the Queen and Prince Philip on their death beds, deeming this their last Christmas. Others have been telling the non-royal and non-British subject Queen Doria of California that she must report to Sandringham to see her daughter and family or else. Many in the media as part of their propaganda machine have quacked on about Harry and Meghan needing to weigh the “optics” of the supposed Fab Four Rift(due to their absence) as more important than spending time with Ms. Ragland; as if Meghan and her husband should care more about that than missing a third Christmas with her. To add some ironic humor to it all, the very people that beat their drums all year about how unroyal and unwelcome Meghan is among the Windsors, and who we’ve been told repeatedly have isolated and do not support her and her husband, are screaming to the top of their lungs and Twitter fingers that Meghan must go spend her Christmas with the those same group of people. That their absence from Sandringham will be the undoing of this year’s Christmas. If you’re scratching your head, you’ve got the right reaction because it makes absolutely no sense. I call it bigot logic. All those haters and bigots who endlessly gripe about Meghan should be excited that they will have a Meghan-less Royal Christmas to enjoy! They should be enjoying the good ole’ melanin free Windsor Christmas!

All should be smooth sailing, except for one major hitch; MONEY!! No money shots of their most marketable royals. I personally have gotten so much enjoyment out of the Sussexes starving the undeserving British Media of money shots and footage and attendant narratives. We all must understand that the Press could care less about the Queen’s age or her traditions. They are just using it to further their agenda. There will be no “fab four” photos or video to analyze and so body language quacks such as Judi James will have to sit this one out. No stories about Kate and Meghan playing chess or Meghan making Kate cry (depending on the day of the week)…blah blah blah.

There is an entire industry full of despicable people that value all of this nonsense over a mother who lives in another country spending her first Christmas in the last 3 years with her only child and first grandchild. I’m so glad that Duchess Meghan with the full support of her husband will not allow the construct of a colonialist Monarchy to erase the importance of her nurturer. I’m impressed that the Grandson of the Queen of England and sixth in line to the throne appreciates the importance of his bi-racial American wife’s black mother. I thank this Prince for valuing the importance of his royal born son’s black grandmother. The British Media, royal courtiers, online bullies or anyone else for whatever motive, WILL NOT ERASE DORIA. She will not be removed from Meghan and Archie’s life because some Brits think they “own” them. Ms. Ragland will not be put aside just because the white father messed up his chances of being a part of the holiday rotations! The things I have seen and heard over the last few weeks have been appalling, but I am also renewed in strength by the resilience of Meghan to continue to honor her loving mother, Queen Doria of California, in all her grace.

22 comments on “Queen Doria Is Indispensable, And You Will Not Erase Her!”