Dear Andrew Morton: Duchess Meghan Was Never A “Failure” Nor Did Thomas Markle Make Her

So according to the British tabloid rag “The Sun.”

The following proves The Sun’s tweet headline to be patently untrue:

“The actress caught the eye of Bond producers who were looking for a ‘glamorous’ American rising star.”

Meghan Markle may have relinquished her career as an actress for life as a full-time philanthropic royal, but James Bond film producers had her down as a fierce Bond Girl before her romance with Prince Harry became so public.

The team behind the 25th James Bond film reportedly shortlisted the 36-year-old star for the Spectre follow-up, after being impressed by her role as Rachel Zane in hit legal drama Suits. Elle – February 2018

And guess who was Elle’s source for this news? The Sun:

“Markle reportedly caught the eye of Bond execs who were interested in casting a ‘glamorous’ American or Canadian star, according to The Sun.” Elle – February 2018

This all proves that tabloids like The Sun knowingly print or tweet headlines against Duchess Meghan which it knows are patently untrue. The reason why The Sun does this is to sell a false and negative impression of the Duchess to it’s readers.

However when you actually read the Sun’s article, Andrew Morton says something quite different, but what Morton says is still untrue.

“Commenting on the early days of Meghan’s career, Andrew said: “Let’s not forget that, for ten years, her budding career as an actress was something of a failure.”The Sun

Apparently Andrew Morton isn’t familiar with how Hollywood or the acting profession works. No one goes into Hollywood or into acting and instantly gains success. What Morton calls a “failure” was actually Meghan doing what all actors and actresses do which is go on hundreds of auditions until they get their big break.

What Morton calls a “failure” is in reality something called tenacity, hard work, and perseverance, words I doubt privileged guys like Morton know much about.

“She was kind of, at 30, over the hill, in Hollywood terms, when she got this gig in Suits.”

A news flash for Mr. Morton, Hollywood doesn’t hire actresses that it considers “over the hill.” My guess is that Mr. Morton is projecting his own views of women over thirty onto Hollywood in an effort to disparage Duchess Meghan.

“The fact that she kept on going on, the fact that she went to all these rehearsals and auditions without the prospect of work showed that kind of determination that her father imbued in her and that has propelled her to where she is today.”

Claiming that Thomas Markle “propelled” his daughter to where she is today or attributing Meghan’s determination to her father, someone who doesn’t exactly come across as determined or with a strong work ethic, is typical coming from a man like Andrew Morton. He obviously doesn’t believe women can have a strong work ethic, ambition, or determination on their own. It seems in Andrew Morton’s mind, there has to be a man behind her pulling her strings.

My question is, if Thomas Markle “propelled” Meghan to where she is today, why didn’t he do the same for his “other daughter” Samantha, or for his son Thomas Jr. who is in and out of jail?

Andrew Morton also doesn’t seem to believe Meghan’s mother Doria Ragland had anything to do with instilling these positive traits in Meghan. Considering Doria is an accomplished and self made Black woman living in America, Meghan more likely got her strong work ethic, tenacity, and determination from the woman who raised her, the woman who has remained true to her, and the woman who Meghan has said multiple times is one of the biggest influences in her life, her mother Doria Ragland. 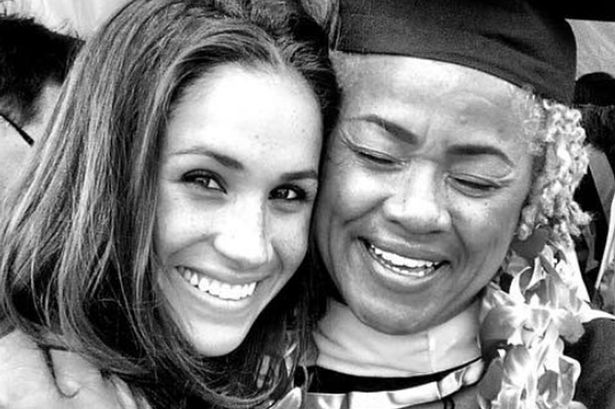