The Duchess of Sussex’s speech included this powerful message:

While I’m here with my husband as a member of the royal family, I want you to know that for me, I am here as a mother, as a wife, as a woman of color and as your sister.Meghan, The Duchess of Sussex

After much anticipation and excitement, our Royal couple, the Duke and Duchess of Sussex, arrived earlier in the day to begin their 10 day tour of Southern Africa. What must have been a quick rest, the Royal couple made their way to their first engagement of the day in Nyanga, a township in Cape Town, South Africa. In Xhosa, the official language of South Africa, the name Nyanga, means moon. According to Wikipedia, Nyanga, one of the oldest and poorest black townships in Cape Town, was established as a result of the migrant labour system. In 1948 black migrants were forced to settle in Nyanga as Langa, another township designated for black migrants, became too small. Nyanga also has a reputation of being one of the world’s most dangerous areas, recording the highest number of murders in South Africa during 2012.

The crowd waiting for the Royal couple were treated to what is now their trade mark of “holding hands”. As they walked hand in hand to meet their hosts and the crowds, they were greeted in typical African style of dancing and music. Prince Harry could not resist showing off his dance moves.
The Duchess wore a black and white maxi wrap dress made from locally sourced 100% cotton, in Malawi by Mayamiko. Needless to say, the ‘Meghan Effect’ followed her to South Africa. The dress was immediately SOLD OUT.

The couple’s first stop was a project that provides self-defense classes and female empowerment training to girls and young women. The children sang a song, “We Are Strong Women”. After some time spent chatting to the women and children, the Prince delivered his speech standing atop a tree stump to a cheering crowd, outside the Nyanga Methodist Church. He thanked the hosts for the warm welcome shown to him and his wife and stated that he wanted Africa to be the first place for him to introduce his family.

“It is time to rethink what masculinity means”, he said. “Touching on what your President said last week, no man is born to cause harm to women. This is learned behaviour and a cycle that needs to be broken. Now it’s about redefining masculinity. It’s about creating your own footprint for your children to follow in so that you can make a positive change for the future.” The Prince thanked the crowd and introduced his wife, Duchess Meghan.

After a loud and rapturous cheer, Duchess Meghan said it was her first time to South Africa. She acknowledged as “powerful” the incredible work of the Community keeping women and children safe. She said she was grateful that the community is open and honest with them about the dangers women and children face and how they were addressing them. “When women are empowered, the entire community flourishes,” she said. She applauded their core values of respect, dignity and equality. The Duchess shared a quote from the late poet, Maya Angelou: “Each time a woman stands up for herself, without knowing it possibly, without claiming it, she stands up for all women.” She told them that she knows it is not easy nor insurmountable, but their commitment is inspiring and energising and is extraordinary. She also stated on a personal note, while she is there with her husband as a member of the Royal Family, she is with them as a “Mother, as a wife, as a woman, as a woman of colour and as their Sister. I am here with you and I am here for you.”

The Royal couple received the gift of a jumper for Archie and a plaque bearing his South African name, which means ‘Pillar of Strength’. As they were leaving for the next engagement, and not to be outdone by her husband, the Duchess was seen dancing with the children.

Hello! It is such privilege to meet all of you today and to start our visit, my first time in South Africa, here in Nyanga.

We have just spent some time seeing all the incredible work that the Justice Desk does and of course all of you amazing women and the men who are here helping you, Mbokodo, you are incredible and what you’re doing is so powerful, because you’re all powerful.

The work that’s being done here is to keep women and children safer, which is needed now more than ever. This is an issue that’s been at the forefront of people’s minds here in South Africa, and of course across the globe, particularly over this past month.

Please know that my husband and I have been closely following what you’ve been experiencing here – as best we can from afar. But now that we are with you, we are eager to learn and see first-hand the work that you’re doing, the vital work that you’re doing, and that everything that is being done on the ground is making the great change that you not only need but that you deserve.

You have welcomed us into this community, have been open and honest with us, both about the dangers women and children face, and about how you are addressing them. The rights of women and girls is something that is very close to my heart, and the cause I have spent the majority of my life advocating for because I know that when women are empowered, the entire community flourishes.

So to be able to meet all of you today who are standing up for what’s right in the face of adversity, I applaud you. We are encouraged to hear your President take the next steps to work towards preventing gender-based violence through education and necessary changes to reinforce the values of modern South Africa.

I do have to say I feel incredibly humbled to be in the presence of all of you as you stand firm in your core values of respect, dignity and equality.

I read a quote a few weeks ago and it resonated with me as I’ve been watching what’s been happening here and your active efforts. Maya Angelou, the legendary poet and civil rights activist, once said: “Each time a woman stands up for herself, without knowing it, possibly without claiming it, she stands up for all women.”

Now I know it’s not easy and I know it must feel insurmountable at times, but your commitment to what is right gives all of us hope, especially your brothers and sisters here in your community who need you to continue to shine your light brightly. Your commitment is inspiring, it is energising and it is extraordinary. You must keep going, you must know that what you’re doing not only matters, it is vital because YOU are vital.

Thank you so much for having us.
The Duchess of Sussex

This is the definitely the first time I’ve spoken on top of a stump! So I thank you.

And thank you very much for the warm welcome today. It was incredibly important to my wife and me to begin our trip to South Africa here in Nyanga with all of you, so thank you for having us!

As someone who has visited this amazing country many times, and as someone who regards Cape Town as a uniquely special place in Africa, I wanted to ensure that our first visit as a family – with my wife by my side – focused on the significant challenges facing millions of South Africans, while acknowledging the hope that we feel so strongly here.

We are so incredibly grateful to be able to listen and learn from you about the issues that define your daily lives in these communities. And that’s what this is, a community. A community where men and women have a vital role to play. Touching on what your President said last week – no man is born to cause harm to women, this is learned behaviour, and a cycle that needs to be broken.

So now, it’s about redefining masculinity, it’s about creating your own footprints for your children to follow in, so that you can make a positive change for the future.

To me, the real testament of your strength isn’t physical, it’s what’s up here and what’s in here. Your strength is in your spirit, which for me means honouring and protecting my wife, and being a positive role model for my son.

Your determination here in this township to overcome extreme adversity is testament to leadership shown by people like Theodora and many many organisations who offer vital support on a daily basis. Meghan and I are truly inspired by your resilience, your spirit, your sense of community, and your belief in a better future for everyone here.

I applaud you for the movement. And we know that you haven’t been heard before, but change is coming, now is the time to come together as a community, and we applaud those of you who are leading the way for South Africa’s ongoing transformation.

Thank you. The Duke of Sussex

After a quick change, The Duke and Duchess of Sussex made a visit to The District Six Museum where they were given a guided tour. District Six Museum was founded in 1994 as a memorial to the forced movement of 60,000 non-white South Africans to Cape Flats, over twenty kilometers away, because the South African government declared Cape Town’s District Six a “whites only area” under the Group Areas Act of 1950. Today, the museum is dedicated to the construction of housing, environmental planning, and the organisation of music, literature, and art activities, with the active involvement of the public, and the goal to join people into a community where there is respect and dignity with the coexistence of different races.

Hand in hand, the Duke and Duchess walked down the street to a community cooking activity with former residents of District Six. The crowds were loudly cheering the Royalty on. A member of the crowd attracted their attention and gave them a gift. The woman was heard saying, “We love you Meghan and the work that you do.” 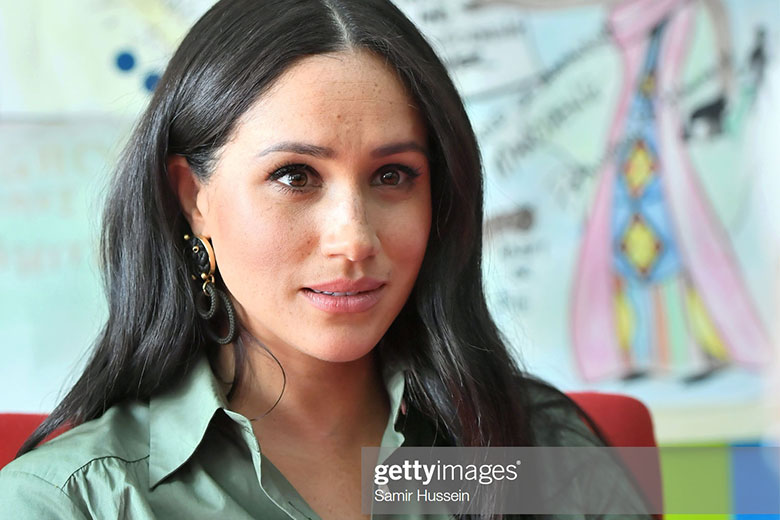