Our next stop for our African Forces for Change feature is in Johannesburg, South Africa, and rightfully so, coming on the heels of the successful tour of Southern Africa, that the Duke and Duchess of Sussex undertook. When I first stumbled on an article talking about the upcoming release of Tafadzwa Zimunhu Taruvinga’s Memoir, The Educated Waiter: Memoir of an African Immigrant, it piqued my curiosity and mostly because the book detailed the personal struggle that this Zimbabwean Writer had undergone in his quest to attain Higher Learning in South Africa. 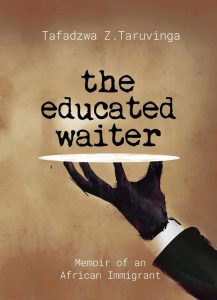 As an African female who dropped out of not one, but two University Campuses over a stretched period of 7 years, it was refreshing to note that there was indeed a happy ending to this story and one intended to inspire many in similar situations, myself included. On the morning of October 15th 2019, Tafadzwa sat down with Hosts David O’Sullivan and Jason Goliath on the Kaya Breakfast segment of Kaya FM to discuss what inspired him to write this book and his experiences as an immigrant living in South Africa, UAE and Germany complete with facing institutional racism.

A powerful statement Tafadzwa made concerning the lessons that his life experiences have since taught him is best captured below;

There are two significant lessons that I have learnt in my life. The first one is that perspective is everything. So you can turn your situation around even in the same situation, if you just sort of change your point of view and how you look at things. The second lesson I have learnt is that no one has the ability or the right to invalidate that which you value as an individual…

The entire interview on Kaya FM can be found here.

And in keeping this motivational conversation going, I reached out to Tafadzwa for this interview.

Hi Tafadzwa, welcome to Meghanpedia: African Forces for Change! I am honored to interview you and congratulations on the publication and launch of your memoir, “The Educated Waiter: Memoir of an African Immigrant”. Our readers are curious to know more about you. Who is Tafadzwa Zimunhu Taruvinga?
Thank you very much Meghanpedia for creating this incredible platform on which I am able to share my experiences with other young people across the world. It is a real privilege. Firstly, I am an author and my passion is to tell African stories in a way that highlights different social issues while entertaining my readers. I am also an entrepreneur and business studies graduate. I hold an economics degree from Rhodes University in South Africa, coupled with other professional qualifications from tertiary institutions in the UK and Germany. I have spent the last 17 years studying and working in Europe, the UAE, Southern and East Africa. I must say, I have vastly benefited from different ideas and cultures in each region. Lastly, I am a global thinker and I dedicate ample time to writing and speaking on various topics, as well as coaching aspiring authors.

It’s amazing how you managed to turn what was truly a challenging period in your life into something positive, inspiring and worth celebrating that would eventually birth a Memoir. Could you please share with us how and why you decided your story needed to be told in a book?
I have always loved literature and I continuously challenge myself to creatively use words to paint different pictures. I started imagining myself as a published author from about 2007, in my mid-twenties. A decade later, I was long-listed – among 20 participants – to pitch a book idea to a South African publisher, in order to possibly be awarded a publishing contract. It was then that the idea of my book The Educated Waiter: Memoir of an African Immigrant came to life: a story in which I share my trials and triumphs as a migrant living in various parts of the world. It is a story which resonates – one way or another – with those of many people out there in the world. It was very important for me to write this story because it is a source of hope for anyone grappling with poverty, racism, xenophobia, classism, among other topical social realities.

The Duke and Duchess of Sussex are President and Vice President of the Queen’s Commonwealth Trust respectively. This is a Trust that is focused on aiding the youth in the Commonwealth countries to be able to enact positive change. As a Speaker and Writing Coach and drawing from your own experiences growing up in Zimbabwe before relocating to South Africa for studies, what have you encountered in your endeavors to inspire and motivate? Do the youth in Zimbabwe and South Africa especially, have the necessary resources at their disposal to enact positive change in their societies?
A major challenge which I have faced – common amongst young people in Southern Africa and other parts of the continent – is the lack of financial resources that would otherwise make education more accessible at all levels. For example, it took me 6 years to earn a 3-year degree, all the while navigating through arduous circumstances. Similarly, many tertiary students on the continent are unable to secure tuition fees, food, basic amenities and textbooks during their studies. Meanwhile, the future of the African continent depends significantly on improving students’ access to financial instruments and, resultantly, to education. In turn, more educated Africans will be better-positioned for alleviating the socio-economic challenges within their respective regions.

It was very important for me to write this story because it is a source of hope for anyone grappling with poverty, racism, xenophobia, classism, among other topical social realities.

You have spoken candidly in your book about your personal struggle in attaining Higher Learning. One of the Duchess of Sussex’s patronages just happens to be The Association of Commonwealth Universities (ACU) which champions higher education as a force for good in the Commonwealth and beyond and equally manages international scholarship schemes. What is your take on patronages such as these and do you feel they are the much needed initiatives in ensuring that even the underprivileged in societies acquire education with much ease?
Patronages such as the ACU and others, which the Duchess is passionate about, are very important and necessary for enabling education in Africa. The education of many fiercely intelligent young Africans is mostly limited by the lack of financial resources. There is particular need for education funding for the African continent because it continues to be among the youngest populations in the world and it is growing rapidly. Young Africans will have a much greater positive impact on global issues if they are properly educated.

In 3 words, how can you describe your journey as a Writer, Speaker, Economist and Writing Coach?
An invaluable steep learning curve.

Our readers would love to read your memoir. Could you kindly let them know where they can purchase the book?
The Educated Waiter: Memoir of an African Immigrant is sold on Amazon and at all Exclusive Books retail stores in South Africa. It is also available at reputable online book stores including AfroKulcha, Redpepper Online and Xarra Books.

There is particular need for education funding for the African continent because it continues to be among the youngest populations in the world and it is growing rapidly. Young Africans will have a much greater positive impact on global issues if they are properly educated.

Thank you Tafadzwa for sharing your thoughts with us all in the spirit of making the world a better place. To keep up with Tafadzwa’s bookish activities you can like his Facebook page https://www.facebook.com/TheEducatedWaiter/ and follow him on Twitter @EducatedWaiter

The Hoperaisers Initiatives: Transforming Young Lives In Korogocho And Its Environs

One comment on “Tafadzwa Zimunhu Taruvinga, Inspiring Many Through His Writing”

Thank you to the Duke and Duchess of Sussex for making this @WCKitchen initiative a reality! Islands like Dominica are on front lines of climate change and face greatest threat of disasters...We need to invest in resilience and food security for all! Next up...Puerto Rico! 🇵🇷 https://twitter.com/wckitchen/status/1364612523652218880

With The Duke and Duchess of Sussex’s nonprofit Archewell Foundation, WCK is developing Community Relief Centers in areas of the world prone to climate disasters. The first Center in Dominica is complete & will also serve as a school kitchen! Read more: https://wck.org/news/dominica-relief-center 3